SHORT FILM PROGRAM:
I Remember Nicole
Texas Bullshit! ― An impromptu protest in the streets of West Hollywood the day George W. Bush announced he would stop marriage equality by amending the constitution.
Dykes & Their Dogs ― A Musical Comedy Dykeumentary! An uproarious dykeumentary about the popular Dykes & Their Dogs Contest in West Hollywood, California! This is not just another day in the park! With contest categories showcasing: Most Butch, Most Femme, Best Singer, and Best Owner-Look-Alike. Sometimes it is hard to distinguish who is really performing the tricks, the Dykes or the Dogs!
Lesbian Fashion?
#NonaHendryx Transformation
Bessie, Billie & Ruth ― Sweet Baby J’ai brings to life divas Bessie Smith, Billie Holiday & Ruth Brown right before your eyes and offers little-known stories about their lives and music.
Michelle or Hillary? ― WE ASKED THE HARD QUESTION!
Underwear Drawer
Waving a Wand ― A Magical Romp Thru LA Pride Parade. Poof! 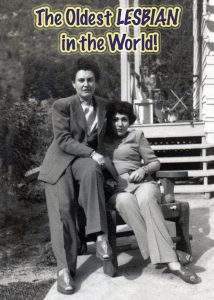 The Oldest Lesbian in the World! ― Meet an old butch who loves women and loves to talk about it! The lesbian Hugh Hefner!

About the Filmmakers
Two-time Emmy Award-winner Renee Sotile and Mj Godges are the Official Lesbian Crew on the scene covering LGBT Hollywood in a way only two Gay Broads can deliver!
Filmmakers/Astronauts/Hollywood Reporters

You may remember their film screening last month, the documentary about Christa McAuliffe.

$5 or FREE for WOTN Members

Not a member? Join Here and get unlimited access.